The time is 14.20 on Saturday the 4th of May, anguished groans echo through the Trent End as over 14000 eyeballs stare aghast at the backs of four Leicester players rampaging almost unopposed towards the Forest goal.

Wood receives the ball. He lays it off to Knockaert. There is an instant of anticipation – like waiting outside the headmistresses’ office for punishment. Goal. Season over.

Moments earlier, Forest had been on the attack, looking for the precious goal to propel them back into the play-offs, when Radoslaw Majewski attempted a highly ambitious through-ball – which was intercepted. With Forest committed going forward, the error proved costly. The Foxes raced down the pitch and dispatched unlucky Forest.


It is testament to the popularity of the young Pole that his mistake didn’t result in any murmurs of disdain from the fans. It was clear at the final whistle he was as upset as anybody, and in truth he deserved some slack because of his contribution up until that point. But what does Raddy do for the team? 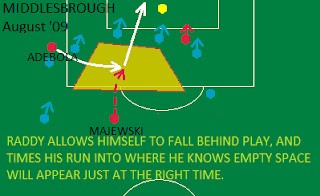 The most obvious trait of an attacking midfielder is his goal threat – Majewski hurts teams in multiple fashions. The most unusual skill he possesses (for this level of football) is his movement off the ball and instinctive ability to find space. Watch the clips of him playing for Groclin as a youngster and you can see him doing exactly what he still does today – some players don’t need to be taught this and it clearly comes naturally to Raddy. The first time we saw it for Forest was his Carling Cup goal against Middlesbrough in 2009, where he instinctively checked his run into the box until the perfect time, allowing space to create itself, ready to be exploited (see right). This deliberate technique is routinely praised on match of the day, when Hansen & Co. are extolling the virtues Berbatov or Giggs, but such vision is relatively rare at this level for a player to do it so regularly, as Raddy does. 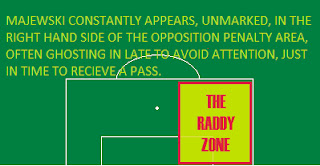 Majewski utilises this skill to find space where there shouldn’t be any, constantly ghosting into the danger zone apparently invisible. This is part of a wider team game as the forwards occupy the defenders, who fail to realise the real threat, as the second wave of attack suddenly appears in space. Raddy does this so consistently, in the same area of the pitch so often, that we at Forest Boffin have renamed this area of the pitch the Raddy Zone (see left). 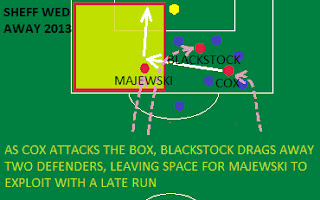 There have been numerous examples of Majewski materialising to find space in this area (or exploiting isolated defenders) and scoring (see example, right), yet for every goal there are half a dozen other times he lurks here and doesn’t score, either through not being passed to, or missing the target. One thing that would improve the Pole’s game significantly is his finishing – his goal-scoring record is slightly disappointing for someone clever enough to find space in these positions. However it’s difficult to grumble at this because, if Raddy could finish more regularly, he wouldn’t be at Forest, he’d be too good for this division.

Majewski is also a threat from outside the box, inclined to shooting from range if able to find enough space. He is most effective in this regard against a defence still backing into their penalty area, rather than an entrenched defence – where he is better utilised passing and probing to create space for others due to his quick mind and technical ability. 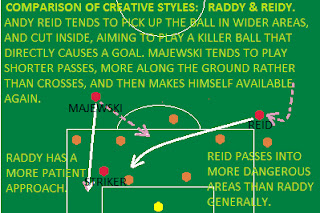 Aside from threatening the goal himself, Raddy is a particularly inventive player. Forest are blessed with a glut of central midfielders who can create, yet it is interesting to compare Majewski with Andy Reid, for example (see left). Raddy is good at playing shorter penetrative passes into the box (as he was attempting to do against Leicester)- especially in between the full back and central defender, which put a defence into trouble. His interplay with the forwards is more two-way than Reid for example, who often looks to supply the striker with an immediate goal-scoring opportunity. Majewski typically looks to progress the attack into a more dangerous situation, it’s more about keeping the ball and making an even easier chance. They are differing creative styles, neither of which is more relevant than the other – it’s good Forest have versatility in their attacking options; Lansbury, Guedioura and McGugan also bring different approaches to this.

However, the most important thing Raddy does for Forest isn’t creating or scoring goals (directly, that is). Majewski is so important because of his superior technical ability. There are very few players at this level as good with the ball, he has a quick-thinking brain coupled with technique, which allows him to move the ball efficiently, needing less touches and progressing the teams position while making it less likely Forest will lose the ball, and this is reflected in Forest’s possession statistics (see right). 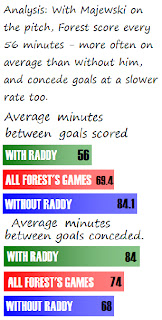 This less remarked-upon role that Raddy plays is his main benefit to the team, for if you don’t have the ball, you can’t score, and are also under threat from conceding. Majewski’s talent isn’t as flashy as that of McGugan, or Guedioura, the damage he does is more silent and cumulative. He helps Forest keep the ball while efficiently advancing their position.

Raddy also plays a role defensively. Fans of The Garibaldi have often had cause to lament their attacking midfielders’ defensive limits, but Majewski is an exception to this: he is very hard working and unafraid of his defensive duties, so much so that when asked recently in an interview what his strengths were, he mainly thought it was his running and fitness.

The 2012/13 season has illustrated not only what a good player Majewski is, but how important he is to Forest. Billy Davies did not hesitate to install Raddy at the zenith of his midfield diamond, recognising the benefits of such a technically gifted player. He has formed an important bridge between the midfield and attack, necessary because Forest lack width in midfield – the strikers peel off to the flanks under Davies, collaborating with the advancing midfield, the first on the scene often being Raddy, who is gifted enough to be able to help keep the ball as Forest advance.

Proof of Majewski’s effectiveness is in the results: Forest picked up almost twice as many points in 12/13 when he played over 45 minutes (see stats, left). The statistics also show that having Raddy on the pitch sizably increased the likelihood of Forest scoring, more so than with any other player, and also Forest were less likely to let in goals with him on the pitch. This is due to the improved possession Forest enjoy with the Pole in the side.

A sign of how much value Billy Davies attached to him is perhaps the extent to which Raddy has been pushed into the media spotlight recently. His earnest and enthusiastic interviews have been a welcome change from the boring diatribe routinely spouted by footballers. 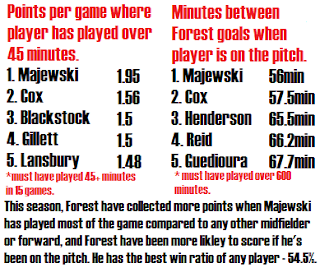 It was perhaps fitting, in a sardonic fashion, that it was Majewski’s inaccurate pass that led indirectly to Leicester’s fateful goal. In one way or another, Forest Boffin would argue that Raddy has been The Trickies’ most important player this term – both in his presence and absence. Majewski was on the pitch for less than half a season – he played 1849 minutes out of a possible 4372, yet he had such an influence when played, he was so important to the best, most enjoyable part of the season, that we do not hesitate to offer him up as an alternative, pound for pound, player of the season. With Forest almost twice as likely to pick up points when he played, we wonder just how well we’d have done if he had managed more time on the pitch.
Thanks for reading, and COYR!