Getting defensive part 2: Partners in crime

Since our return to The Championship, Forest have appeared to be particularly vulnerable down their flanks, no matter who is in charge or what formation they employ – it has led to some of our full-backs looking poor. We at Forest Boffin would contend however, that this problem has not been one of personnel – it has been down to a poor relationship between those full-backs and their midfield support.

The centre-backs is not the only defensive partnership on the pitch, a 'winger' (or any midfielder responsible for the space down our flank) must form a relationship with his full-back as well –  left to fend for himself the full back will simply become outnumbered (see an example from the Cardiff game below, in which Jara is left to defend alone. All pictures and diagrams on Forest Boffin can be enlarged if clicked). 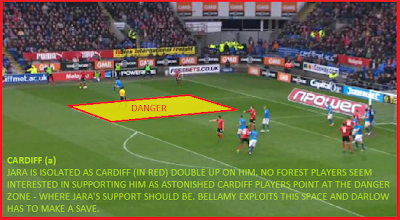 Whether because of the unsettled side, tactics or the attacking nature of certain midfielders wearing the Garibaldi, these partnerships have been rare at The City Ground – the only recent example was that of Chris Gunter and Paul Anderson. Anderson vexed many Forest fans who felt disappointed that he didn’t fulfil their expectations of him being a flying winger. While it was true that he wasn’t tearing through opposition defences, he was benefiting the team when Forest didn’t have the ball. Disciplined positionally, he supported Gunter by doubling up on opponents and knew when to make the under-lapping runs that freed the right-back allowing him to move safely away from the centre-backs without leaving space. Forest were much more solid down our right with these two playing, in stark contrast to the left side – which was targeted by opposing sides because of the space to be found there.

At Forest Boffin we believe this is still a problem – it's possible there is a culture of neglect in this area and base this theory on the continued lack of improvement, which will be highlighted below. The team is crammed with creative players, however they are all central players either unused or unwilling to engage with a full-back and form a partnership. 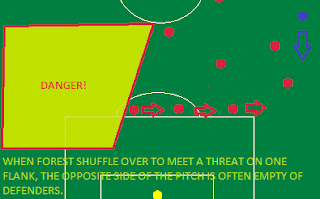 The problem is at it’s most obvious when our opponents are attacking one of our flanks. Forest Boffin first noticed this habit in the days of Colin Calderwood and it hasn’t gone away whoever has been in charge. As a team brings the ball down one side of the pitch, Forest’s defence correctly shuffles over to meet the threat (see diagram, left). In this instance, the midfielder on the opposite side of the pitch has a job – by shuffling across the full-back furthest away from the ball effectively becomes a centre-back, leaving space; it is the midfielder’s job to defend this easily exploited space. Paul Anderson was particularly considerate of this threat. As a rule, Forest’s more attacking midfielders neglect this duty. 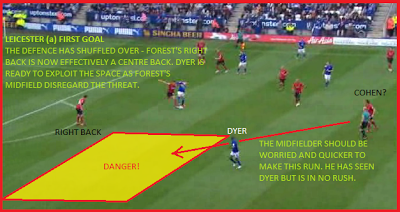 A good example of this problem can be seen when viewing the first goal conceded away at Leicester (see right). The ball has come down The Foxes’ right wing and Forest’s defence have shuffled over to meet it, leaving a huge swathe of empty grass on our right. David Nugent has noticed this space, as has our right hand midfielder, Chris Cohen, who can be seen to glance knowingly at Lloyd Dyer, surely recognising the threat. Bafflingly, Cohen does nothing about it until it’s too late. Nugent receives the ball and plays in Dyer who runs into the space and eventually causes a goal – but it’s not done especially quickly. Cohen has ample time to get close enough to help defend this area but decides against it. This unwillingness to defend this area of the pitch is no isolated incident – it is habitual and does not seem to vary with personnel. 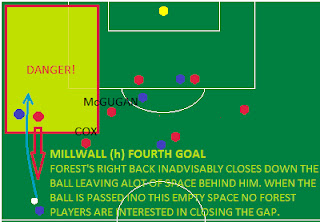 The worst example of this last season was the last goal Millwall scored at The City Ground in November. It is arguable that, with only ten minutes to go and trailing 3-1, the players could have given up (arguable – but certainly not acceptable!), but once again it shows that Forest’s attacking players have no interest in defending this area of the pitch, Simon Cox and Lewis McGugan being the guilty parties here making no effort to track back and pressurise James Henry – who had all the time in the world to play an accurate cross which resulted in a goal. Neither player were likely to have covered enough ground to make a tackle, but by not bothering to put pressure on him he had time to reach a more dangerous position and to concentrate on a better pass. 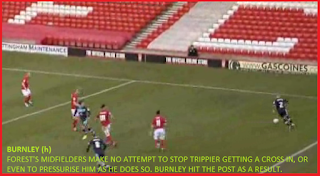 McGugan is again guilty of this neglect at home against Burnley, along with Andy Reid (see right). Against Millwall you might argue he was tired and the game was already over – but it is only the 19th minute when McGugan and Reid decide to just let Kieran Trippier have a totally unmolested cross, actually jogging lazily away from him when the picture is taken. Martin Patterson hits the post and Forest survive.


I could pick out examples of this in just about every game, and while most teams will do this at times, this is a particular problem at Forest and has been for some time. It could be forgiven if this was the players not recognising the danger or being caught out of position because they are trying so hard to get a goal – but in our opinion they seem to recognise the problem and are often in a position to do something about it – they just don’t seem to think it is their job to assist the full-backs in defending this area of the pitch.

Could the reason for this be the type of player they are? McGugan and Reid – by far the worst offenders (in our opinion) are by far our most creative. Either one of them can create a goal out of nothing and are amongst the best in The Championship when their team has the ball, but what about the other half of the time when we do not have the ball? If they are not going to play their part defensively, then that is around 50% of the game we have to carry a passenger or two. In this highly competitive league, nobody can afford passengers however good they are. McGugan’s goals have been crucial, and Reid is easily our most productive creator (as will be proven in an upcoming article), but the fact is they do not form partnerships with full-backs and it hurts us.

In defence of the midfielders, this is a teamwork issue as much as neglect on their part. You often hear the professionals stating that they “defend as a team” – the fact is Forest often don’t. When a goal is conceded it is tempting to blame the defenders, but without teamwork their job is impossible. Derby’s goal at The City Ground is an example of Forest being ripped apart because they are not defending as a team (see right). Like with the centre-backs, if there is too much space between the full-back (Harding in this case) and the winger (Reid) it can be exploited. Reid has no idea how much space is behind him, because he has no defensive relationship with Harding whatsoever – they are defending as two separate entities. The Irishman goes chasing the ball, trying to win it but not being mindful of the space he’s left. Harding cannot close up this space because Paul Coutts has taken up a clever advanced position on Derby’s right wing. Forest’s central midfielder could help by either stopping the ball getting to Will Hughes, or defending the space Reid has left – he does neither, Craig Bryson plays a 1-2 with Hughes allowing him to get past Reid and exploit the space. Harding is stranded now, alone and outnumbered he cannot stop Coutts getting the ball, or crossing for Bryson to score. 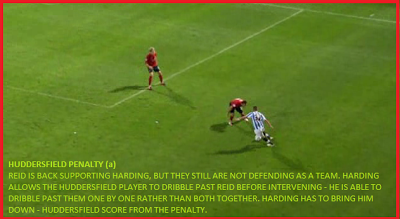 But it does not take such a clever move to breach a defence not playing as a team – look at what happened against Huddersfield (see left). Reid and Harding are again defending as two separate entities rather than as a team. It’s two against one here – there shouldn’t be a problem, except Harding is at fault this time, again there is too much space between him and Reid, allowing Jack Hunt to beat them one by one, rather than having to beat both of them working as a team.

When isolated Harding has shown himself to be beatable, as in the above example, yet in his defence, and this goes for all of Forest’s full-backs, in the circumstances he has a very difficult job because full-backs at Forest don’t get enough support from the midfield. Harding is a good defender at this level – we have all seen him prove this by keeping Wilfred Zaha quiet last December, and he has proven it in gaining promotion with Southampton. 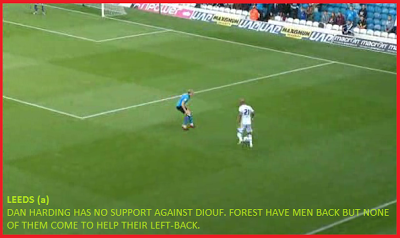 To be fair, the better wingers at this level should be able to get past the likes of Harding at some stage over 90 minutes. Players like former African Footballer of the Year El Hadji Diouf and future England star Nathan Redmond will inevitably create something if your defence has any kind of weakness. The Championship is littered with players as talented as these two – we’ve seen how to defend against these kind of players at the City Ground recently – not by Forest though! Barnsley and Blackpool have shown us what is required defensively – the solution is to organise and team up against the more skilled players, to deny them the space they need. At no stage against Blackpool could a Forest player take someone on without immediately having someone come to his rescue – we only managed a goal because one of these ‘rescuers’ mowed down Simon Cox.

Forest have been guilty of sacrificing their defensive teamwork to allow their creative juices to flow – this is not surprising since our most influential players are all attackers, nor is it particularly objectionable – we all crave goals after all. But since this is a defensive critique the point needs making. Do we want a Paul Anderson type on both wings, or two Andy Reids? Midfielders who can both defend and attack are exceptionally rare at this level; they will all have strengths and weaknesses, the trick is finding the right balance. Forest fans should probably be satisfied with what they have been seeing on the whole - this is just an area we believe they could improve, a critique not a lambasting. We would like to stress that we're not having a pop at our midfielders - we're aware that at this level, we can't have everything.

This article has picked up on what we at Forest Boffin believes has been, and still is, Forest’s biggest weakness. We are blessed with creative players who are great to watch with the ball, but fail to develop a defensive relationship with their full-back, and this leaves us vulnerable down our flanks; we believe this lopsided nature of our increasingly centrally based attacking talents have led to a culture of neglecting their defensive duties, so much so that even the likes of Chris Cohen have been caught falling into this trap at times. It hasn’t mattered who is our manager, or what system we play – our opponents are consistently able to find space in wide positions, get in lots of crosses and outnumber us in this area, which at times has made our full-backs appear out of their depth.


It will be interesting what additions Billy Davies makes over the summer, and whether he tackles this problem - which is at least as big an issue as that of our centre backs - which incidentally will be the subject of the last part of our dissection of Forest's defending in part three of Getting Defensive, coming in a few weeks. Thanks for reading, and COYR!
Posted by Forest Boffin at 08:56