Forest fought their way back from a goal down to draw against an impressive Burnley side on Saturday, and were unfortunate not to take all three points in an enthralling encounter. 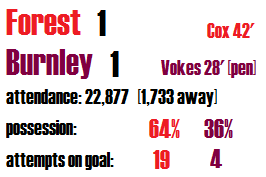 This was never going to be an easy game when you consider what Sean Dyche has achieved at Burnley since his appointment last October. It is the free-scoring duo of Sam Vokes and Danny Ings grabbing the headlines, but Burnley’s real strength lies in the defensive improvements Dyche has implemented, organising and installing a defensive ethos into his team in a successful effort to slash the amount of goals they were haemorrhaging – the biggest improvement has been in away games; last season saw them concede an average of 1.5 less goals in away games under Dyche than before he arrived. 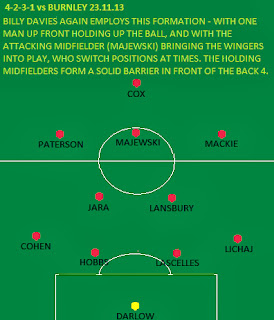 So it was always going to be difficult to break Burnley down. Billy Davies opted to stay with his new 4-2-3-1 formation, but even considering The Garibaldi were missing some key players, the line-up always looked more balanced and capable going forward than on previous occasions (see left, all diagrams on Forest Boffin can be enlarged when clicked). The two Jamie’s, Mackie and Paterson, were the wide men ready to attack the channels, in front of Lansbury and Jara playing in the holding positions.

But perhaps the main difference compared with the Blackpool and Leicester games was the presence of Radoslaw Majewski and Simon Cox down the middle. Majewski in particular is beneficial because, as I've illustrated on many occasions, Forest keep the ball better in advanced areas with him in the side – so adept at moving it along efficiently, this one player alone, improves our possession by several percent on average (see stats, below). 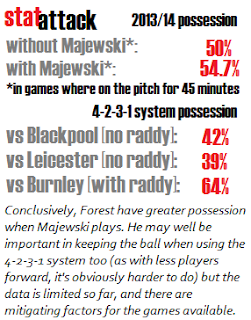 Simon Cox is also good at keeping the ball and bringing others into play, and he was at it again against Burnley in conjunction with Majewski, as Forest were using these two players to establish possession in the opposition half and then bring the wide men into play. Because Forest were able to keep the ball and put Burnley onto the back foot, Mackie and Paterson were able to get into dangerous positions and do damage with the ball.

Forest were thus more dominant than they have been for a while, not only because they could keep the ball in the Burnley half, but also because Burnley couldn’t get going in the Forest half – because the 4-2-3-1 system was ideal for nullifying the threat of Ings and Vokes. Davies had clearly done his homework defensively; the Burnley duo like to pass their way and run through the centre – the two holding midfielders, as well as the centre-backs, denied them the space to do so. Burnley ran out of ideas and (up until their slice of luck) had resorted to direct balls that were being gobbled up easily by Jamaal Lascelles, and in particular Jack Hobbs.
But Burnley did indeed get lucky; in a rare occurrence, they found some space down their right wing, with Kieren Trippier’s cross striking the arm of Gonzalo Jara. The crowd gave referee Carl Boyeson a lot of grief when he awarded a penalty, but this really is a grey area and if it were the other way around the Forest fans would have wanted a penalty. Vokes gave Darlow no chance – 1-0 to Burnley, against the run of play.

This prompted a minor wobble as Forest looked shaky, but they soon re-established their authority. Davies had his tactics spot on for this game, he knew how disciplined Burnley are defensively, but he also knows how to put extra pressure on this kind of defending, and he did so by encouraging Forest’s full-backs Lichaj and Cohen forward even more than usual. We’ve already seen how the extra man can confuse a rigid defensive system against Huddersfield (see our first goal of the season, here) – Burnley’s defence was being stretched to the limit.

The two wingers had a good game, in particular Jamie Paterson, who provided the breakthrough. The discipline of Majewski and Cox in keeping the ball rather than taking risks helped establish a base from which Paterson in particular could express himself – he was also exploiting space which was occasionally being left when the Burnley defenders had to worry about our advancing full-backs. A constant threat he beat his man for the equaliser, crossing perfectly for Simon Cox, who bundled the ball into the net. Cox deserved his goal, but Paterson deserves the credit for a great piece of play.

Half time rescued Burnley, after which Forest had another poor period, possibly caused by a shuffle in personnel. Eric Lichaj was withdrawn due to injury, with Jara retreating to right-back and Nathan Chalobah slotting into midfield next to Lansbury. The Chelsea midfielder took a while to get into the game, giving the ball away repeatedly and being slightly off-pace positionally – this delayed Forest’s progress, but to his credit he improved and The Reds set about putting more pressure on The Turfties. 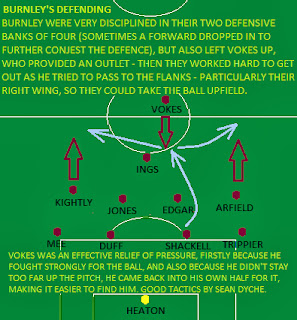 Sean Dyche knows how to organise a defence, and Burnley produced a fine defensive displays. They were using two narrow banks of four (sometimes Danny Ings was dropping back to make the outer line a bank of five) and were organised very well so that very little space appeared; Forest couldn’t really get close to their penalty area un-harassed. They also proved their tackling skills – I was particularly impressed with Trippier, Mee and Shackell.

Another aspect of The Clarets' defensive play was the role of their two forwards, Ings and Vokes. I’ve already mentioned that Ings was dropping back to help (he may as well have, because he got absolutely no change out of Hobbs and Lascelles at the other end of the pitch – kudos to the Forest defenders), but they left a man up at all times – usually the bigger, stronger of the two, Vokes. This proved significant, because upon clearing the ball, Vokes acted as an outlet, fighting valiantly for the ball, and often winning it, giving his team respite and then passing the ball wide where Burnley were springing forward in a pre-planned tactic, taking the ball back into Forest’s half and relieving the pressure even more. It was a brilliant example of team defending. 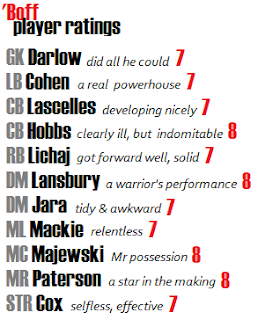 Forest went close but were unable to get the winner. Billy Davies said afterwards that only one team were ever going to win the game – this is probably accurate. His team had much more of the ball, and created many more chances, but they could not dismantle the excellent Burnley defence, and in my opinion Forest’s progress was hampered by the changes Davies made – enforced or not. Djamel Abdoun replaced the influential Majewski as Davies looked for more penetration, less possession – I can see the logic but it turned put not to work as the Algerian proved ineffective. Henderson came on for Paterson and worked hard but could not find space, but the main setback was the introduction of Chalobah – not that it was his fault, but Forest were looking so supreme at the time, any change would have been a hindrance and Lichaj’s injury stalled Forest for the first ten minutes or so of the second half.

Forest outplayed and nullified the league leaders, apart from one piece of luck – that’s the chaos of football though; you don’t always get what you deserve. This was one of the most entertaining games at The City Ground for a while, one which everybody concerned can come away from happy. Some have been critical of the team recently – and it is a concern that Forest have not won any of their last three home games – but Billy appears to have them playing well again in this new system.

More of the same on Friday will surely see three points, but perhaps the most important issue of this coming week is the fitness of captain Chris Cohen, who limped off in the last few minutes with what looked like a nasty injury. Hopefully this very important player, as well as Eric Lichaj, recovers soon.

Thanks for reading, thanks to the BBC website for the quick stats, if you agree or disagree I'd like to hear from you, either in the comments section or on City Ground Faithful forum, the direct link to the relevant thread is here. COYR!
Posted by Forest Boffin at 10:52